The Sanluri Castle is one of the best-preserved Medieval fortresses in Sardinia.

As the last to remain from the original 88, it stands inside a fortress enclosed by 1,550 metres of walls over four and a half metres high.
In the 14th century Pisans worked non-stop to build the castle in little over than a month and its grounds have set the scenes of some of the Island's most important historical events.

Hundreds of years later in 1927, Count Nino Saint Villa (1884-1960) created a Museum in the fortress where you can go to find out more about the castle’s fascinating history.

Inside you will find the flag that waved on San Giusto's tower in Trieste on 3rd November 1918, when the city became Italian; and the leaflets that Gabriele D'Annunzio dropped from the plane during his famous flight over Vienna in 1918.

Today, thousands of tourists visit this interesting Sardinia castle and its museum – so why not join them? 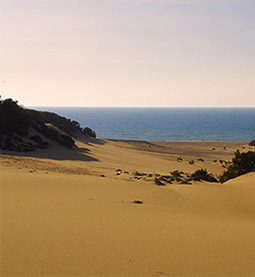